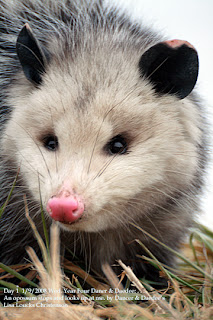 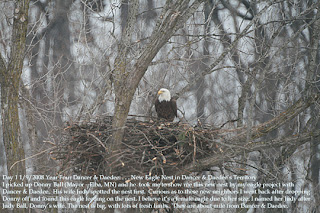 
Thank you for your constant encouragement and timely words to begin my year four of the bald eagle project.

My uncle Festus died last night. The last thing I expected for today was to be heading into the woods. I expected to be packing my truck and heading south.

Now that the day has almost passed, looking back, I would almost think my uncle Festus was with me and Donny.  I will miss you Festus. You know I loved you.  May you watch over me on this year four project.

I started out today with just the intentions of scouting. Instead it was a record day for photo opportunity. Donny (my bodyguard), he watches over me, him and Paul, but today he was my good luck charm as well.

I went with the Mayor Donny to scout a new nest in the pair of eagles territory. His wife Judy had spotted it a couple days ago. Yesterday I got a call from him asking if I knew about this new nest. He told me I better come down and check it out. My eagles would expect that.
Of course, I had to come down to the eagle project area. I had to just see if my eagle pair was building a new nest, or was there a possibility one of their eaglets had returned and were building?

I picked Donny up at his house and we drove the short distance. Sure enough, there was a new nest. I noticed it as I took a bend. I may as well say this now. I am purposely leaving out location details, and roads, and landmarks. I am doing this for the protection of the eagles, and myself. I've had my share of unwanted crimes while trying to do a project I feel is my plan from the Lord, but mostly, it's to protect the eagles.  Reporting crime tends to bite you in the backside.

This new nest was unoccupied, but newly laid, fresh sticks told me someone was building there, and that someone was likely in the area now, gathering more sticks.

I wanted to show Donny a couple other nest locations I'd been watching. On the way, I spotted, to my amazement, a migrating pair of trumpeter swans who were likely en-route to Monticello, Minnesota, to join the thousands of others who will be passing through Minnesota over the next several weeks.

I joked to Donny, "Now if I could only find an opossum out here on the frozen pools I would be convinced to start year four."

On our way back, it was then that I found Dancer and Daedee. The pair of eagles I've watched
and documented for the past three years. I wasn't sure how they would react to seeing me so I
talked quietly and shot numerous shots.  Daedee flew up almost to the road side trees and Donny got to see her up close.

Dancer remained perched.  I was hopeful I would at least get a glimpse of one of the eaglets from this past year.  Twins that are nearing one year of age.

I took Donny back to town, but felt a tug to go back. A strong urge that I should. So I did. I stopped and shot more images of Dancer and Daedee. I got to watch Dancer fly down
pick up a long stick and fly it back to the nest. I watched him weave it into eight years of
layered sticks and pine boughs.

Then I was heading back to the swans, but on my way I thought I'd pull over and shoot a couple frames of the new nest to compare it to the nest of today in a few weeks when I would officially start year four. I hadn't realized it yet, but I was half way through my first day of year four. Isn't it amazing how God can work details all around you, and someone like me, will miss every clue?

As I neared the bend with the new nest I pulled over and focused my lens on the nest and found someone else.  I found the owner of the new eagle nest. She was sitting on top feeding on an unknown food source. I was amazed. I was unsure of how this was going to unfold for this years book.  Eagles so close they could breath on each other.  I waited for an hour, hoping to catch a glimpse of her mate.  No one joined her today while I was there.

This eagle appears to be a female, however, I could be completely wrong. She is a large bird however; about the same size as Daedee. Her beak is deeper yellow. I named her Judy, after Donny's wife who first spotted the new nest. Maybe I would have found it too, maybe not.

So I photographed up until nearly 2 PM and had to return to get my girl from school.  So off I went, but who do you think I met when I passed Dancer and Daedee's nest area? He was sitting roadside looking up, almost begging for his photo-op.

Nothing impressed me more than his pink nose against the dirty white snow, and those two watery-chocolate-brown eyes peering up at me. Then the opossum scampered into a woodpile and licked the water off the undersides of the shelf mushrooms there. It was a sight I will never forget. This entire day was a ticket, and my chapter opening to Year Four Dancer & Daedee.


Tonight, I headed out to Wal*Mart and picked up some new boots, and video tape for tomorrow. Last year the day I started year three we hit a 20 day -45-50 below with wind chills and I this year I want warm feet. Inexperiece is a learning tool, but only when you learn.  Don't you agree? I'm posting the new eagle nest with Judy, and the opossum. I'll try and get Daedee and Dancer's pictures from today posted by tomorrow.

If you are in Wabasha, MN, be sure to go to the National Eagle Center. I have two exhibits up there on their walls. My Winter Bugs! exhibit a traveling collection from my Winter Bugs! book and exhibit, and my Prelude to Year Four: Dancer & Daedee, my past three years with Dancer and Daedee the bald eagle pair raising their eaglets before me.

I always appreciate your comments and prayers. Especially your prayers.  Last year I went through  a two day blizzard, and two major floods but got the story. Every year is something new.

Every season a new challenge. Especially keeping photo gear working, and my clothes from tearing, cracking, and my computers from dying in the rain and dust.
I feel good that God has blessed me this year, this new nest opportunity, and I'm anxious to share that with you.
See  you on the journey--
Lisa
Posted by Lisa Loucks Christensonat 11:00 PM